Goodbye for now — but WAIT, WAIT, not yet!

Well, here’s a perfect ending to a perfect (in its own way) experience here on WordPress.com.

In my haste, I posted my blog’s farewell a bit prematurely last night, trying to meet my self-imposed deadline. And then today, after I thought I’d retracted it to give it the attention I saw it needed and felt it deserved, I accidentally republished (or reposted?) what I thought were “just drafts” throughout the day.

Lourdes Mint (that vaporous image below) almost seems to thi

nk it’s funny, or at least she’s not at all embarrassed about it. Look at her! Pen names can be so disappointing, really, so much the opposite of what you thought they might be. Lesson learned.

But we, I, hope you’ll give the finished work a look when it’s done — tomorrow, I hope. What a year this has been! Thanks!

Trouble with Homonyms: Exorcise versus Exercise

I’ve always had some trouble w/ homonyms, not those that make people think you don’t really don’t know what you’re doing (e.g., their vs. they’re vs. there), but this kind: “I went to the PEEK of the mountain to take a PEAK.” I solved the problem in this particular instance by linking the two eyes you might use to peek with to the two e’s in peek. (Please don’t tell me I still have it wrong…)

Anyway, lately my Writing has taken a turn. If you’ve read my About, or you can see what I see when I look at my blog (still not clear on who sees what), you know that I have very little time left to reach this blog’s goal. And I think trouble with homonyms may be at the bottom of it — because if something’s wrong with your words, then something’s wrong with your world. The two can’t be separated, I don’t think, because they are the same thing, SAME THING. No difference. And I’m 100% sure of this. No, I KNOW it. So if you’ve got two words switched around in your head, well, then ….

I think there’s a fine line between exorcising your demons and exercising them. And while I never set out to do either in this blog, I do think somewhere along the way, I started exercising something that maybe needed exorcising. And then at some point, I think those demons started using my blog as their gym or even a sort of personal trainer. And now my demons are all big and buff and SWAGGERING about, sipping their electrolyte-infused, colorful beverages and admiring themselves and, secretly, one another in the mirrors I’ve set up all around them. They used to be so easy to fold-up and stow-away… And even though I never forgot about them, I felt they were safely confined/contained, when really NOW I think it was the opposite. “We’ve got this one in the bag,” I can hear them saying just before going on an extended vacation.

As far as most of my demons go, though, they are pretty unremarkable — the usual stuff. The subset I’d call my writing demons, the ones that cause the most trouble here, are also of the garden variety, for the most part. They include the ones that yawn loudly while I read something I’ve written back to myself, the ones that slip in little errors or cliches here and there to remind me that I’m not a natural, the ones that whisper in my ear, “If you were really meant to do this, you’d find the time … even now,” the ones that tell me nothing will ever come of my writing. But none of these bother me all that much because they’re so generic. I’ve heard more than enough about them in every book on writing I’ve ever read ,,, and I couldn’t seem to get enough of these in my late 20s and 30s. Because these demons don’t seem to know anything specifically about me at all, beyond that I aspire to become a successful writer, I can and do ignore them (for the most part).

The writing demons that get to me are those that seem to have crafted themselves, piece by piece, out of certain specifics from my own life, past and present, that the writer in me cannot really stand to admit. And over time, these snippets from page after page of the memoir I’ll never write (because it cannot lead, in any version of the truth that I can imagine or abide, to my becoming a successful writer) have morphed, in the soggy backwoods of my brain, into the absolute worst of the big and buff and SWAGGERING demons who’ve been exercising in my blog, my mind, my life. You might not see them if you didn’t know what to look for, but I know they’re there and they know I know they’re there and am hoping I can keep them hidden, which of course is exactly how they get their power. My unwriterly life, the shame or doubt it causes me, pumps them like nothing else.

Well, no more. I’m calling (at least a few of) them out now.

Immundus spiritus #1: Skin, as in “by the skin of [my] teeth,” as in that’s how I passed high school. You like to replay the memory of when I ran up to my English teacher on graduation day and whispered in her ear, “Well, do I get a diploma today?” and she said, “Yes, Miss, but you’re passing by the skin of your teeth,” and I hugged her till she smiled — only hearing “yes,” not really understanding what the rest meant, not really giving a shit. I just had to get across that stage so I could go to Ocean City with my friends. I’d worry later about how to get out of going to college or pass it, too, by the skin of my teeth. But anyway, we all know how that turned out. (Not so bad…)

Immundus spiritus #2: Remy, you like to remind me about how I had to take remedial reading during my first year of college and how I fell asleep in the front row, just exactly like a narcoleptic, during every single class. You point out how I am still a slow reader and take a long time to really grasp what I’ve read. You’ve pretended to comfort me, insisting that I shouldn’t feel too bad given that English is not my first language. (But it is.) You used to think it was funny to highlight entire pages of text or underline words like “and” and “the” and place question marks in margins. I used to think it was funny, too …

Immundus spiritus #3: Space, you’ve adopted my high school nickname “to keep it alive” because you feel it was a mistake for me to let it go. “It just fits,” you tell me, assuring me it’s more endearing than offensive. “Plus,” you say, “it gives people a heads up about what they can expect from you.” That way, your logic goes, no one’s surprised when I can’t answer the question because I wasn’t listening, I show up with my shirt on inside out, or I’m not there at all because of a(nother) “Google calendar sync mis-hap” thing or because I have no idea where my keys are. “Please don’t take this the wrong way,” you’ve said recently, “but couldn’t one argue that mindfulness and attention to detail are the very soul of art, including writing, just … for example?” Space, you’ll never grow tired of gathering evidence to support your position on the old nickname/me/any of this. And, indeed, there will likely always be plenty of evidence to gather. With better credentials, you’ve pointed out, I could have passed for the absent-minded professor type, but we both agree it’s a little late for that. But then, it’s late period. And here I am. (You might mention that to Remy, by the way.)

Immundus spiritus #4: Eff, you like to say that’s short for “Effort” — you think it’s “tremendous” how hard I try. But what you really like talking about is all the Fs I’ve gotten on papers, especially when I was just starting out in college. “No one understood what you were trying to say. That’s what it was,” you’ve said. And “it wasn’t that the papers were so BAD,” you’ve explained, “they were just incomprehensible … to your reader. That’s all.” And this probably has something to do with the fact that I had only just come to America around that time (right?) and was still learning the language, you’ve generously proposed. “Yes,” I now know to say … “That was probably the reason.” You like to compliment me then, saying I could almost pass as a native speaker now. I always thank you in so many words. And you say, “de nada,” or some such, reminding me at every opportunity that there’s no language you don’t know. How are you doing at understanding me now: not just what I’m saying, but what it means? Take your time.

Immundus spiritus #5: 1999 (as in “Tonight we’re going to party like it’s …” ), you are in awe of my history of partying and doing all sorts of stupid and inappropriate shit. You’ve said that if my penchant for festivity and fun had only (HAD ONLY) been coupled with a strong creative spirit and robust artistic discipline, I might have been able to parlay some of my more interesting but misguided adventures into something worthy: art … redemption, even. “But at least you’re not one of those people who lied on their death bed and said, ‘gee, I wish I hadn’t worked so hard, been so serious, etc., … wish I’d had more fun.'” I used to ask why you always talk about me in the past tense. You’d avert your eyes, pretend to blush. But now I just say, “good point.” You’re in awe of the way I’ve finally come around.

Immundus spiritus #6: ADD-y (or ADHD-y, as you prefer, because look at you go!!!), you are a skinny, crazy, speed demon, you are! You’re new around here and so I’m not really sure what I think about you. For now, I just want to see you and Immundus spiritus #3 fight.

Immundus spiritus #7: Just-Weird, you are the worst, the damned-est, of them all. You and Eff like to work out together, I’ve noticed. But you are clear with me that you understand: my problem with words and the world they make, as well as the true basis of my fear that I won’t, finally, be able to connect (and there is “only connect”), is not that I am still learning the language or have some kind of cognitive or behavioral issue, but that — even though I may look, from across the soccer field anyway, like a soccer mom— I’m terrified that I’m just weird and that what I have to say is also just weird, that it doesn’t and won’t connect with people, not in the way they want to connect, not in the places where they hope to find connection. You snort at my blog and its goal, at my odd little stories/vignettes, essays, and drawings, etc. You snort at me. But you don’t snort at what’s coming … rising up, tsunami-like, between all of you and me. You just do another rep. To that I say, good idea! Keep at it!

Maybe give the others “heads up” too.

Happy Mother’s Day — a day for happy mothers? a happy day for mothers?

My mother’s day present is TIME to write!!!

(followed by dinner w/ my family) 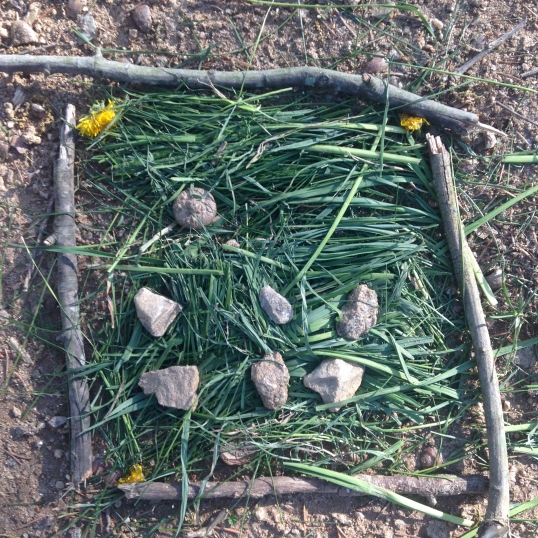