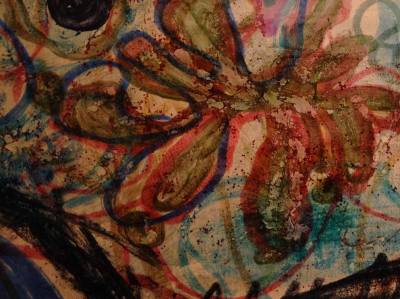 Let time pass. Let all kinds of time pass. Once he was settled toward the back of the bus, alone in a two-seater (which he knew wouldn’t last), Nohl shut his eyes and let himself meditate on this gentle imperative. Earlier that morning, as he showered, it rose up and hovered in his mind like steam. On the bus, though, he imagined that the words came to him just then from somewhere outside of himself, way outside. He saw a large slick, insulated (and insured) envelope, containing this message, blasting past black holes and through mesospheres and stratospheres and whatever other ‘spheres there might be, through different kinds of cosmic dust and space clouds, and then dispatched into the earth’s atmosphere, where it continued down along the pale but fast-goldening sun rays of this mid-July morning and caught a warm upward breeze, which sent it very un-coincidentally into an open window on this very same ride. Let time pass. Let all kinds of time pass. That was all it said, but according to the envelope it was meant for him.

Better still, he would like to think the words were delivered specifically to him from “On High,” along with instructions, “Guidance,” on what to do during this “all kinds of time” and how about after it passed, too? Yes, please. And just a bit in the way of explanation regarding the big “why?” of it all would be helpful. But no, nothing like that had ever been, would ever be, forthcoming, Nohl had come very slowly to understand. Feeling agitated, also tired and a little sick because of last night’s activities (the good, the bad, the inexplicable), he tossed about in his seat, his exoskeleton-like exterior clashing with the exoskeleton-like interior of the bus. In one particularly herky-jerky maneuver designed to discourage anyone then boarding from sitting with him (as a favor to them, he thought), he ended up spilling his coffee into his old running shoes, which he had no recollection of taking off. Huh. Could the new Nohl be the kind of guy who takes his shoes off whenever/wherever he pleased … on a bus like this, no less? Why not? He kind of liked it, smiled to himself. So how about throwing away the soggy no-good beaters, laden with roads already travelled, at the very first rest stop, cutting yet another tie with the past? He liked that too — poetic. And he’d just put on the pair packed in his carry-on.

The Nohl who packed the bag late last night was worried about grubbing up these other shoes, which were nicer and newer, on the long bus ride. Today’s Nohl got that but considered it a little strange that he decided to put them in the carry-on at all (given the size of the bag). But then, he often saw evidence of another, wiser, version of himself, who could see further past the surface of things, the present, than the regular Nohl could, knew what to do sometimes when the regular Nohl didn’t (but not every time, far from fucking every time. Last night for example. OK, just: Let time pass. Let all kinds …). Wiser Nohl was there to help pack the bag, sure, but where was he exactly when Russell told him that Francis Fahy was dead and regular Nohl felt compelled to excuse himself to use the bathroom — which he did but not before paying Fahy a little visit (“just to be sure,” was the thin explanation he offered himself), not before having to set his stop-watch bag to zero again. And here he was today (yeah, “as for me…”), wiser Nohl nowhere to be found. He tried to focus on the shoes in his bag, something hopeful, something that made him feel that there were plans for him still and maybe he wasn’t damned after all.