Day 9A: Finders, Keepers (Daily Prompt): “No one ever believes my stories” (Part 1)

Trying the Daily Prompt again today (http://dailypost.wordpress.com/dp_prompt/finders-keepers/), but it will have to be quick with all I have to do. The only reason I’m allowing myself to respond at all is that I have this wonderful, practically ready-made response, a story actually, that I’ve always wanted to write up and today’s prompt is just screaming, “Today’s the day!”

Just a peek for now: The story comes from a girl I roomed with during my 19th summer, when we were both working at a breakfast and lunch place right on the boardwalk. She was out walking on the beach very early one morning, normal for her, and found a wad of cash (more than $600) in a nice heavy clip and a stunning women’s ring (platinum, she thought, with a remarkably clear emerald), along with some other items in a crumpled, greasy paper bag half-buried in the sand.  She told me all about it a few days later: what she did with it, what happened next, how it all ended — kind of unbelievable, but well worth sharing. (That’s Part 2, so PLEASE come back.)

But first, here is my own personal response to the prompt.

Back then, to be fair (so I’m not ultimately comparing apples to oranges), if I’d found that bag of goodies, I might have taken it to the first person I spotted who appeared to be in any position of authority. Boardwalk security guy on a bike? Perfect. Lifeguard? Yes, probably. Bouncer? Possibly so (depending on whether I knew him). I think I would have been afraid to go to the police — given the neurotically guilty conscience I was plagued with then.

Now, I’m not so sure what I’d do. My guess is I’d either leave the loot where it lie or take it to the police, suspecting that either way, there’d be little difference in outcome — little chance that the lost-lings would be returned to their rightful owner(s). And this is not a dig against police, but more the sense I have that whomever lost the treasures had either stolen them him(or her)self or figured they were gone for good and returned home without them, but with a beefy story to share.

(I can imagine the man with the money clip: “We were lying on our backs until about noon, when Nancy took out some money for lunch. We ate right there on our towels. And then at about 2 pm, as we were turning onto our stomachs — to keep things even, you know — Seth comes out of the water, says he wants a coke. That’s when we realized … . So, what I’m saying is it happened while we were there, right there, but with our eyes closed. Sickens me, Nancy too. And it’s not the things, the money, the ring, the rest of it: they can be replaced. It’s the fact that the place has changed THAT much. Poor Seth, all our kids: they’ll never know the carefree, good times we enjoyed there when we were …” [Nancy, red, almost spitting, as she interrupts: “Actually, that ring cannot be replaced. It belonged to my Aunt Penny. Thank you.“]  Money clip man: “Okay, well. But you — you all — you get my point.”)

Back to what I would do: I’m sure I wouldn’t pocket the stuff — then, now, ever. And I can say with 100% certainty that I wouldn’t have done what Stacy did, not because it was so horrible or wrong or anything like that; it was just so … strange. What she did, the thoughts behind her actions, they simply never would have occurred to me, not in a million years. When she told me the story, she made it clear she was sharing it with me and no one else, not because she didn’t want anyone to know, she said, but because she thought I might believe her. And then she said, I remember like it was yesterday, “No one ever believes my stories.”

Did I believe? Do I now? I don’t know. Every time I ask myself that question, my mind answers with a complete non sequitur. Just now, for example, as I asked myself again, my mind shoots me this memory:

I am sitting with a nice boy on the beach. He likes me but nothing will come of it. He hands me a conch shell, which I’m thinking he must have planted there. (Even then, all the really good shells were gone. And this one seemed to have a weirdly glossy finish.) “Try this: it’s really neat,” he says, as he holds it up to my ear. “What do you hear?” “Ummmmmm, the ocean,” I say, already knowing the answer, which everyone learns early on (right?). “That is neat,” I say. He smiles, so very obviously delighted. But all I heard, all I think anyone hears, from inside a shell is something like, “sssssshhhhhhhhhhhhhhh” or “ahhhhhhhhhhhhhhhhhhhhh” (right?). That day, though, I do hear the ocean (but with my other ear), as the waves are crashing less than 30 feet away from us. I remember suddenly feeling so sorry for the boy, still smiling. “That is neat,” I say again. “Really neat.” 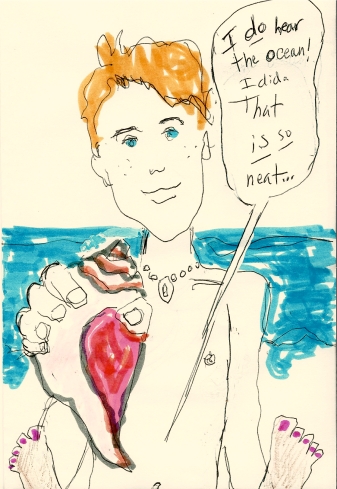 So what kind of answer is that? A yes or a no? Did I, do I, believe Stacy’s story or not? Maybe I can’t answer because I don’t have to answer, because it doesn’t matter. Just the telling of a story makes it a thing of the world, something that exists, something to be reckoned with if you’re so inclined — to be passed along (maybe forgotten) or kept like a secret — as I have this story for so long, turning it over and over again with the fingers of mind, my own sparkling emerald. All the while thinking, also, I should write it up. I should, I should, I should — for years — and now here (or rather in Part B), finally, I am! Or, I will, after I get some real work done.

Ugh. Where did the morning go and most of the afternoon? I have to say, so far, this project is wreaking havoc — HAVOC, I say — on my life. I love it. 🙂 But havoc is havoc and I (and mine) can only stand so much. But I do think things will come out okay once I/we get through this transition (using that word WAY too much lately), that they will get better and better and finally be right: I will be writing regularly, finishing pieces I’ve started (the good ones) and starting new ones, and become a writer (that is, for me, a writer people read!) — all with a relatively manageable, liveable life still intact. That’s what I tell Roberto, my husband, and I think he believes me.

I do wish that the process could be more straight forward, more balanced and comfortable, more methodical (oh, hope against hope!), and that I felt just a little more like I know what I’m doing. BUT when you’ve pulled the number(s) I’ve pulled on my creative yearnings for as long as I have (20+ years), I know not to expect or wait for that feeling. So if I will go with it for now, allow that thing (the would-be writer in me) to have her way with me for a time, I  can see a much more workable, peaceable arrangement evolving — and, at some point, success.

But we’re not there yet. Oh, no, we are not. On a day like this, we stare at each other, a great distance between us (nothing much below), and finally fly at each other to meet in mid-air … and do what, exactly? For now, something like this.

Please come back (anyway …) for Part 2! Time to pick up Elliot.